You are here: Home / Guides / Do Sharks Attack Paddle Boarders?

When you first go out paddle boarding in the ocean, it can seem a bit daunting. After all, the waves and the wind are different here than out on the lake and it’s a whole new territory. Especially after you remember that recent shark movie you watched.

If you’re more worried about the sharks than the water conditions, you’re certainly not alone. The ocean can seem beautiful and exciting, but sometimes the animals that live in it are more terrifying than your local lake fish. Those super popular shark movies like Jaws and 47 Meters Down certainly don’t make things better either.

Before you completely freak out, you should take into consideration what the chances are that you’ll actually be attacked. In order to feel safer while out on the ocean, read below to find out the facts and reality of sharks and paddle boarders. 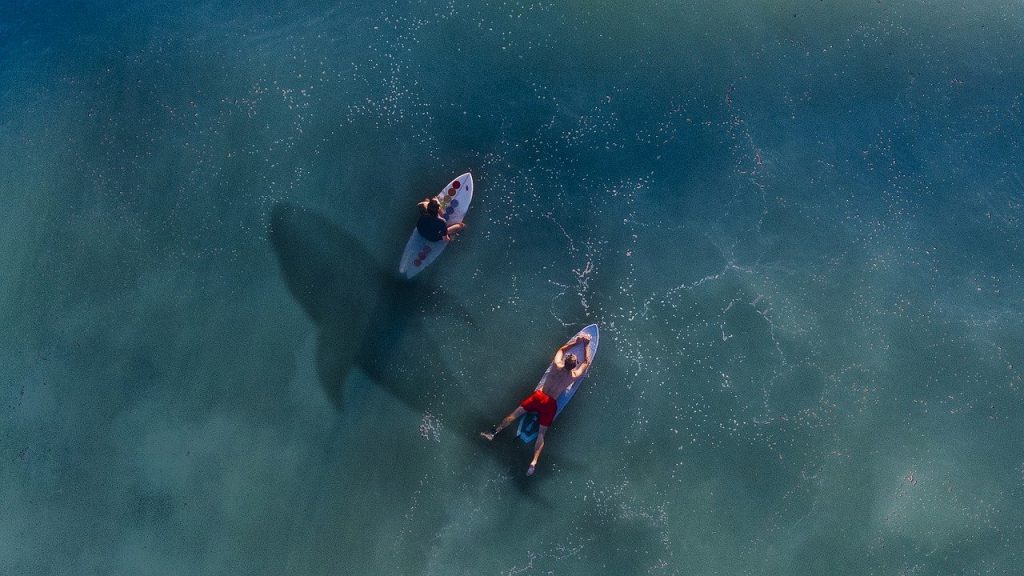 In full honesty, sharks can and sometimes do attack paddle boarders, especially if you are in an area where sharks have been sighted in the past. There are several reasons for this and it certainly varies from case to case, but it’s something you should keep in mind. Sharks are native to the ocean and you need to remember that you are in their home and not the other way around.

Sharks are wild creatures and will react as expected if they feel threatened. If you do see a shark, remember that you are at their mercy and that the odds of you fighting a shark and winning are rather low. That doesn’t mean you can’t survive should a shark attack you, but you need to be aware of the possibilities and how you should safely react to them.

How do Sharks Attack?

Despite this, it’s still good to be prepared so that you aren’t caught by surprise. In order to be the most prepared you can be, let’s look at how sharks may attack.

Any unprovoked attack can be really frightening because you just don’t expect it. It could happen while you’re not even paying attention so make sure you are always aware of what’s swimming around you and don’t doze off in the sun.

An unprovoked attack is unpreventable. Since it’s the shark that makes the first move and is unprompted, there is very little you can do. However, there are three different types of attacks that could happen when you are the victim of an unprovoked attack.

Bump & Bite: This type of attack occurs when the shark first bumps into your paddle board and knocks you off. If you are in a kayak, you may be able to keep your balance better but if you’re on a stand up paddle board, it’s very likely you’ll be knocked into the water. Once you’re in the water, the shark attacks.

Sneak Attack: The classic sneak attack is a fairly regular attack type. This happens more often when you are far out in the deep ocean and are more unprompted and unexpected. In a sneak attack, a shark will swim up behind you and attack in your blind spot. These attacks can be pretty jarring since you don’t see the shark beforehand.

Hit & Run: Vaguely similar to when a person commits a hit and run attack, this is when a shark will bump into your paddle board, often by mistake. They are likely thinking you could be food and after giving your paddle board a test bite, they’ll move on.

If you provoke a shark into attacking you, then it shouldn’t be either a surprise or an accident. When you try to touch a shark, sneak up on it, or attempt to poke it with your paddle, it’s almost certain the shark may lash out in retaliation.

The shark might think it’s being attacked and in an attempt to defend itself, it could turn around and attack you in return.

There are some ways to prevent getting attacked by a shark while you’re out on your paddle board. Some are more just common sense (like not trying to pet, poke, or otherwise bother the shark) whereas others may be brand new information. Here are some of the top tips for preventing and avoiding shark attacks.

If sharks are already feeding, then they’re more likely to try out you and your paddle board. You may look interesting or delicious and only after they get a decent chomp will they decide otherwise. By avoiding the regular feeding times (dawn and dusk), you can avoid being mistaken for a snack.

Don’t get lazy while you’re out paddling. Always keep an eye out for sharks even if they are far from you. If you see signs on the beach warning about sharks or come across a dead animal, this could be a bigger sign that you’re in a shark infested area. Don’t write off any of these and decide you’ll be fine.

This can mean many things, but really it falls under common sense. Think of the most dangerous animal native to where you live. Is it a bear? A moose? Maybe it’s a mountain lion. Treat sharks how you would treat any of them: with great caution and space. Give sharks their distance and don’t attempt to touch them or swim beside them. If a shark comes up beside you, don’t put your paddle in right next to it, but try and give it some space.

Shark attacks are scary and there is good reason to be afraid of them. It’s common sense to not want to be attacked and by following a few general safety tips, you’ll be okay. Just remember that sharks are animals too and they just want to keep living. As long as you don’t appear threatening, leave them be in their home, and don’t go looking for trouble, you should enjoy a nice, shark attack free afternoon on the ocean.