We have already reviewed our selection of the top inflatable paddle boards, now it’s time to look at the best solid paddle boards (SUPs). Over the course of this article you’ll see some of the finest performing SUPs you can buy today.

When it comes to choosing a stand-up paddle board, you have two broad types to choose from: inflatable and solid. Solid boards – just like inflatables – have their pros and cons and these will inform your decision over which to buy.

The benefits of a solid paddle board are numerous and include being ready to go when you are. Unlike inflatables, if the mood takes you, you can just grab your solid SUP and take it straight out onto the water. Hard boards are also faster and more agile making them ideal for SUP surfing, SUP racing and traveling long distances.  Smaller solid SUPs (under 10′) also make great paddle boards for kids as they are much more stable.

But before the excitement of catching a few waves takes over your head as well as your heart you need to bear in mind a couple of issues. The first is: do you have space to store your solid board off-season, and the second is: do you have a large enough vehicle and roof-rack to transport it safely?

These solid SUPs are made from epoxy, fiberglass or wood and are sometimes referred to as ‘traditional’ boards. We’ve chosen from a range of prices so you can be sure to find a great quality board to suit your pocket (and your level of experience). 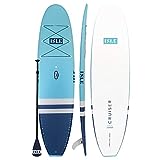 The Isle Cruiser is a vibrant and comfortable solid board. It comes in three two-tone colors: blue and gray, aqua and gray, and yellow and gray. It’s an all round board meaning that the fore is rounded, aiding stability, making it ideal for beginners and anyone who likes that bit of extra security. Boards intended for racing tend to have a more pointed fore section.

The Cruiser is one in a long line of great quality boards from a company that has been trading for over 15 years. Isle is a true American specialist in SUPs, based in San Diego, California.

The solid Cruiser measures 10’ 5” long by 32” wide and 4.5” high. It’s quite a thick board and this adds to its buoyancy and stability. The thickness shaves a few percent off its top speed but this isn’t a board aimed at those who like to ride fast. Solid boards are heavier than inflatables but this one is very portable, coming in at under 29 lbs. The recommended maximum rider weight is 235 lbs although this can be exceeded if you have a bit more paddleboarding experience. To the general public, solid boards have an image of being uncomfortable or slippery to stand or kneel on. The Cruiser happily blows this reputation away – it is covered in a soft-touch polyethylene skin that gives the rider a good grip and padding. The structure of the board is EPS (expanded polystyrene) which is what keeps the board’s weight so low.

As an entry level solid paddle board we were impressed by the features that come as standard. On the board itself it has a substantial bungee area to secure your belongings. You also get a good quality, ISLE-branded, hybrid paddle that floats should you lose it overboard.

Not every paddle you buy will float which always amazes us, there is no rider out there who has never dropped a paddle over the side and it seems crazy to make any that don’t float. However, we digress. The Cruiser comes with an accessory bundle including detachable fin with an easy attach and remove mechanism. Then we have a sticker pack and a great quality 10’ long coil leash. The package is rounded off with a straightforward user manual.

ISLE comes up with the goods once more with their Versa model, a rigid epoxy board that is aimed at beginners and intermediates. The Versa is available in three color schemes: aqua, blue and a particularly striking yellow, all featuring a sizable gray traction pad. This board has the all round silhouette that is favored by anyone who prefers stability over top-line speed.

The Versa is 10’ 5” long by 32” wide by 4.5” high. The healthy thickness and width of the board give it great stability. This makes it ideal if you are keen to practice SUP yoga or SUP fishing. The maximum load weight is quoted as 275 lbs, one of the higher ones on the market. If you and a friend or family member weigh less than this you could use this board to help introduce them to the sport. It’s surprisingly light too, weighing a sprightly 27 lbs. Maneuvering it around is painless thanks to this and its integral carry handle.

Out on the water the Versa behaves as expected, cruising across lakes and gentle seas with ease. We were impressed at how well it handles small waves too. As an epoxy board this is more rigid than the ISLE Cruiser and to us feels a little faster and more responsive.

It is supplied with an adjustable hybrid carbon/plastic buoyant paddle, a detachable center fin and user manual. As with all ISLE paddleboards you get a ‘Ride it and Love it’ guarantee where you can return it – subject to a restock fee – if you’re not completely satisfied.

Stand on Liquid (SoL) is a second manufacturer that has built a great reputation during its nine-year history. Based in Bend, Oregon these paddleboarding lovers develop and test their own designs out on the cold waters of their local shores and the warmer climes of Mexico and the Kohala coast, Hawaii. It gives them an edge over any competitors who are simply in the business for the money.

The Sunset series of stand up paddleboards comprise a rigid polycarbonate shell with ABS rails making them among the most durable on the market. Internally it boasts an EPS foam core with a hard PVC framework. It’s one of the pluses of the inflatable rivals that they survive dings and scrapes better than hard boards but we’ve chosen hard boards like the Sunset partially because of their robustness.

The Sunset is a 10’ 6” all round paddleboard with a clean white, orange and blue pattern. Its width is 32” and its thickness is a whiskers under 5”, making it a very stable board indeed. At only 27 lbs the Sunset is an easy to maneuver board out of the water and it’s no slouch on the water either. It’s well-balanced and ideal for beginners or intermediates alike especially if you spend most of your time on flat water. It has a standard bungee area in the fore section ready to take some of your gear.

Where comfort and grip are concerned this paddle board features a decent-sized traction pad. The Sunset is a little light on accessories but does come with a branded fiberglass adjustable paddle.

Featuring a design first released in 2018, the Muse delighted us with its colorful design, build quality and handling. To be honest we shouldn’t have been surprised – Boardworks has been creating amazing boards for over 25 years!

Beyond the attractive graphics, the Muse is a very capable performer. Measuring 10’ 6” long by 32” wide with a slim profile of just 4.25”, it consumes flat water distances with ease and tackles small waves with aplomb. Primarily aimed at beginners due to its stability and all round shape, we also recommend it to intermediates because of its agility. Boardworks cite three weight bearing capacities based on the rider’s ability. From beginner, to intermediate through to advanced these are 185 lbs, 205 lbs to 235 lbs.

The internal structure of the Muse is stringer-less EPS core encased in fiberglass cloth and epoxy resins to ensure durability. It’s built using Boardwork’s proprietary EPX technology and the latest in CAD design. From its technical interior to its equally technical exterior, this all round board impresses with little touches such as its carry handle that also serves as a secure locking mount should you need to leave it unattended.

On the water it is comfortable for hours at a time and you feel sure-footed on its large honeycomb traction pad.

A little over a decade and YOLO with their mantra of ‘You Only Live Once’ have fast become a big name in the paddleboard arena. This board is another all round design and combines interesting looks – a custom sea turtle graphic in an intricate pattern – with a quality build. It’s a reliable performer and is ideal for beginners and intermediates particularly those who want to indulge in a bit of SUP yoga or SUP fishing.

We like the neat touches such as a LiftSUP pop-up handle that is well-placed for ease of carrying and using to secure when not attended but also folds away when you’re riding. Internally the Sugar Skull comprises a Bahne epoxy structure that gives the board a sturdy and resilient feel. It’s worth pointing out that this board comes with a Goretex air valve. Not all solid boards do but they allow for expansion and contraction of the outer shell through changes in heat and humidity. We have seen boards’ epoxy shells buckle or deform so the presence of these valves gets a big thumbs-up from us!

Other design features include an integral GoPro mount which we find really useful and long for the day when they become a standard fitting across all SUPs. There is a bungee area fore and aft that gives you a lot of stowage space for longer excursions. It also helps you balance on your board by splitting the weight up so you don’t become nose-heavy.

It measures 10’ 6” by 31.5” by 4.8” thick making it one of the narrower and deeper boards in our review. At only 27 lbs the Sugar Skull is a great compromise of stability and agility, its shape making for a steady base but one that can also cut a few moves when propelled along.

404 is one of those companies that you may not initially consider when the bigger names like ISLE so dominate the field. It’s a relative newcomer to the industry, just celebrating its tenth anniversary this year. As with all our favorite board manufacturers, 404 started off with a handful (or less!) of likeminded paddleboarding enthusiasts. In 404’s case, these were a professional surfer and shaper, and world-renowned outrigger paddler. Despite being more interested in racing, 404 rapidly diversified into all aspects of the stand-up paddleboard arena.

The Rover Soap is our only example of the longer 11’ 6” board. It’s slightly narrower than its rivals, just 30” wide but it has an astonishing thickness of 5.2”. With such a surface area it’s no wonder that it’s extremely stable. In the water it tracks as sharp as a die partially due to its slight nose rocker and partially to a well-designed FCS 9.0 Touring Fin system. This board is aimed more at intermediates to advanced riders although a relative beginner would still have a great experience on it. In fact if you owned this as your first board it would grow with you as your riding skills and experience develop.

The Rover is available in two eye-catching color schemes, a vibrant green and a blue, with a swoosh-style graphic. Structurally this 404 is built on an EPS foam core which is encased in layers of fiberglass. There is a soft handle built into the traction pad which is well-placed; it’s near the board’s center of gravity, making it reasonably easy to maneuver. The Rover, unsurprisingly given its extra length and thickness, weighs a couple of extra pounds. At 29 lbs it’s still not overly heavy – we’ve seen smaller boards weighing more!

On board we have nose and tail bungee anchors giving ample stowage space. A GoPro mount makes a welcome appearance too and this is definitely a board you’ll want to film your adventures from!