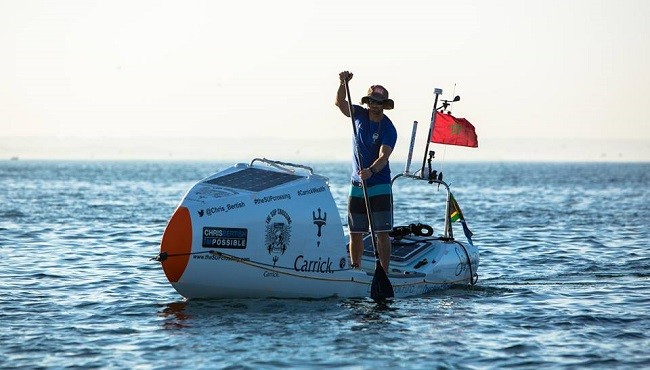 The vast body of water that is the Atlantic Ocean is tough to tame even for the most seasoned sailors. Stories of shipwrecks and men lost at sea abound, and no one truly knows how many lives the great ocean has taken over the centuries. Yet that hasn’t stopped one South African adventurer from attempting to be the first person to cross the Atlantic, all alone, on a stand-up paddleboard.

Author, public speaker, and avid adventure sports enthusiast Chris Bertish departed from the north-west coast of Africa on December 6 in an ambitious attempt to travel more than 4,500 miles across open water to the Caribbean. Bertish’ voyage will be one for the record books once it’s completed, but even in reaching the halfway point in early February, a number of records have already been set.

For Bertish, daily life is a struggle to stay on pace so that he makes it to his Caribbean destination before he runs out of provisions. Things are now looking good despite a perilous first month that had him moving backwards more often than forward. In fact, Bertish found himself just 28 nautical miles from his launching point two weeks into his trip. He has since overcome rough seas and high winds to catch the trade winds he hopes will push him across the Atlantic.

For the record, Bertish’ journey is not taking place on a standard, off-the-shelf paddleboard. Instead, the adventurer is riding a custom-made craft designed specifically for this trip. His paddleboard, known as the ImpiFish, is just under 20 feet long, weighs 612 kg, and offers a host of technology and safety features designed to keep Bertish as safe as possible.

ImpiFish boasts an on-board satellite communication system, an autopilot system, a water desalination system, and even a watertight cabin in which the intrepid explorer can sleep. All his electronics are powered by a solar array so that Bertish can complete his trip while leaving no carbon footprint.

After two months on the open water, Bertish has already seen several potentially dangerous mishaps. The Alternative Daily reports that he is been swept overboard, capsized, and had to deal with numerous mechanical malfunctions. A number of his mishaps have been made worse by the fact that they have occurred at night. However, ImpiFish does have a built-in feature that has come in handy more than once on the trip: the purpose-built paddleboard is able to right itself after being capsized. So even if Bertish is sleeping in the cabin if a whale or shark overturn his craft, the danger is minimised.

Taking a Risk to Help the Oceans

Bertish’ journey, by most standards, is one with a lot of risks involved. But that’s okay for a man known for his adventurous spirit. Bertish is making the Atlantic crossing in order to raise awareness about ocean conservation and the need to protect marine ecosystems that are more fragile than most people realise. His trip is being funded by a group of corporate sponsors who also hope to raise funds for many charitable projects.

Halfway through his marathon crossing, Bertish is in good spirits and enjoying his time on the open ocean. It’s just another trip for an adventurer who has been the first to do a lot of things in the sport of paddle boarding. When he reaches the Caribbean sometime near the end of March, he’ll have another impressive feather in his cap.